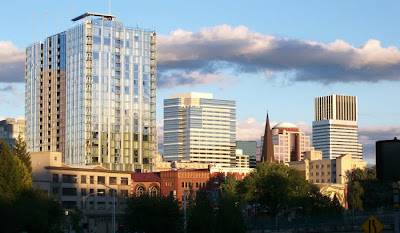 We really liked Portland, and found it easily walkable. Our motel was located just south of the Nob Hill neighborhood, east of Washington Park and a mile from the river. We were up a slight hill (nothing like in San Francisco), which gave us some good views of the city. 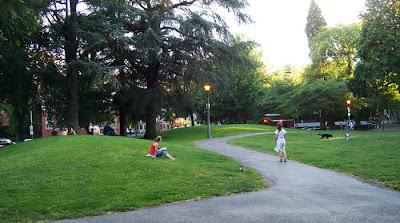 We were near several parks including Couch Park (above) and Washington Park. We drove through Washington Park but didn’t have time to really get out and explore it. It’s huge, and it also connects to other parks, which makes it seem even larger. 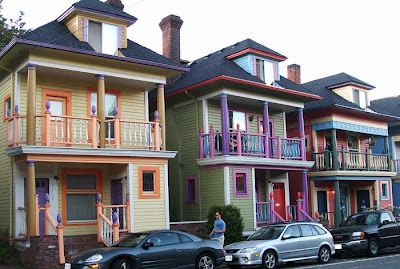 While we were walking we saw lots of interesting things including these brightly painted houses. 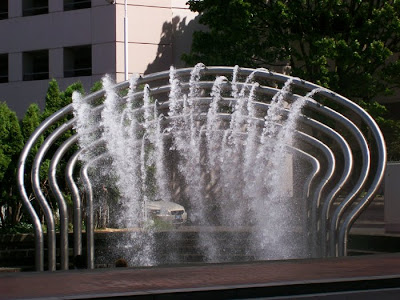 And several pieces of public art. This one even looked cool when the water wasn't on. 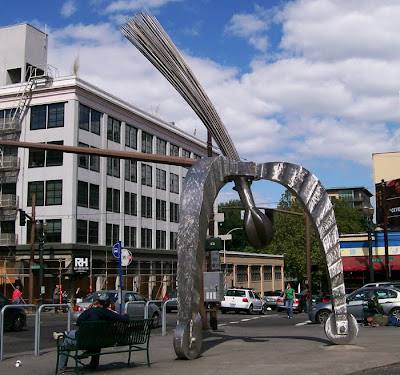 This one reminds me of the round, pink typing erasers with a brush on the end. And while there's are to see by just walking around Portland, there are also places to view more formal art.
Portland Art Museum : I must confess that we didn't go see the art at the Portland Art Museum as I wasn't especially interested in the special exhibits they had while we were there. I had a more personal reason to go there. I went to go to the gift shop because I was hoping to find some key chains or something with their initials (PAM), but they didn’t have anything like that.

Museum of Contemporary Craft : They were installing a new exhibit, so there wasn’t much to see, but the stuff in this gift shop was nice, although no key chains with their initials, either.
=== 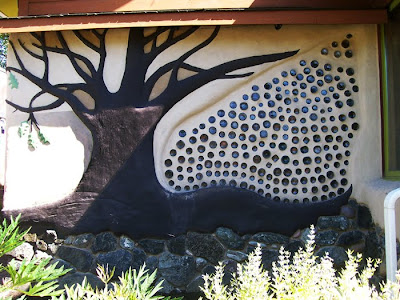 People’s Food Co-op : I even found public art at the People’s food co-op. This is a tree on the outside of the building (where they also have vegetation growing on the roof). 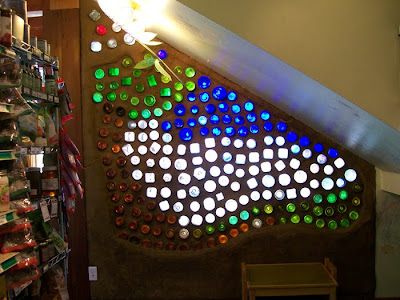 And here’s what the tree looks like on the inside with the light shining through the colored bottles. Now I'm trying to think of where we can do this on our house. 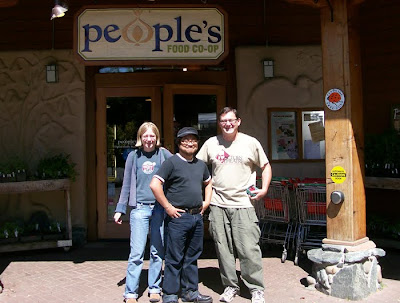 It’s always great to reconnect with old friends while on vacation, especially when they’re willing to show you the city and some of their favorite places. This is us with Todd (he and Scott knew each other at Wright State U.) and this is the food co-op where he’s a member. You can buy food there even if you aren’t a member.
=== 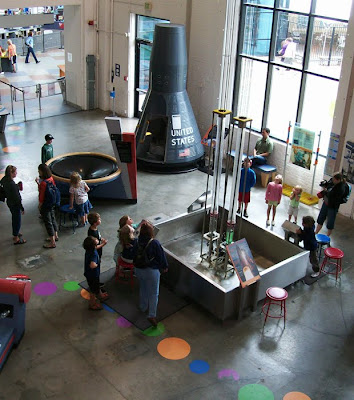 Oregon Museum of Science and Industry : OMSI is really cool. They had some brain teaser puzzles that I enjoyed trying to solve, and lots of hand-on exhibits for kids of all ages including a replica of the Gemini space capsule that you can actually sit in. (At one of the motels a few nights earlier we saw “Apollo 13” which is one of my favorite movies.) 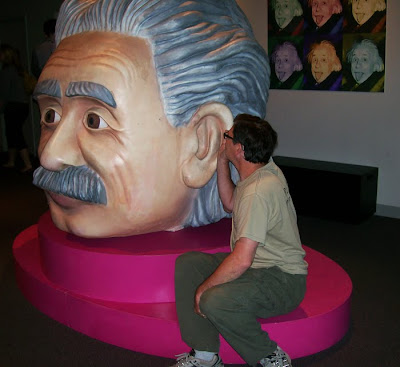 Scott explaining black holes to Einstein, or maybe he's telling him what he wants for Christmas.
The special exhibit at OMSI was about Einstein, which I was interested, although it did involve a lot of reading.
===

If you’re a quilter or a seamstress then no trip to Portland is complete without a stop at the Fabric Depot, which has 1.5 acres of fabric. I bought 1 full-yard and 14 quarter-yard cuts, and was only in the store for 1.5 hours. (What a patient husband I have.)

When I was getting the information about Portland together, it didn't seem like a lot. Then I realized that this part of the trip was about food and local beers. Be sure to check out my post on lodging and dining in Portland, and you'll also learn which places our friend Todd likes to go.
Posted by Pam Geisel - For Quilts Sake at 8:14 PM