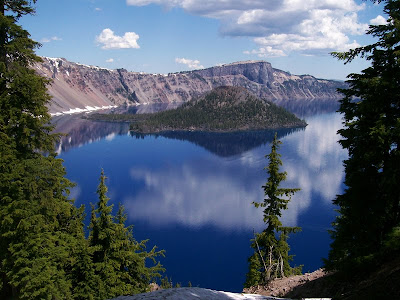 Crater Lake National Park is located in the southwestern part of Oregon. It was formed when Mt. Mazama, an active volcano, erupted and then collapsed into itself creating a caldera. The 5-mile wide caldera filled with rain and melted snow and is the deepest lake in the US. 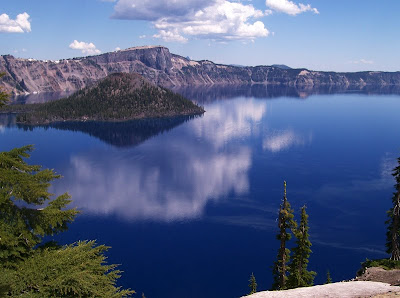 When we got to Crater Lake, we stopped at the first overlook we came to. The view was amazing and the water was so incredibly blue. We ate a picnic lunch there, even though the mosquitoes were fairly aggressive (and the only mosquitoes we saw the whole trip). 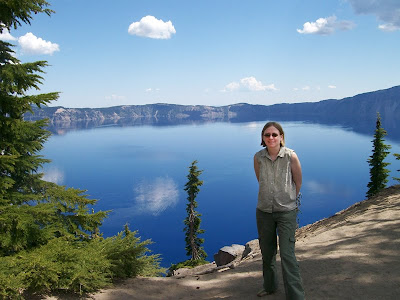 Pam at one of the Crater Lake overlooks.
We stopped at several other overlooks, which all had spectacular views, and most have parking areas right there. 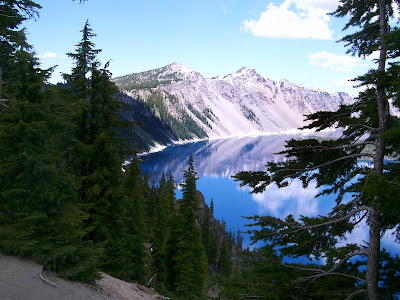 There’s only one place where you can get down to the water, and that is at Cleetwood Cove, and it’s a 1-mile walk down. This is also the only place you can get in a boat, which is a ranger-led boat tour. We didn’t do it. 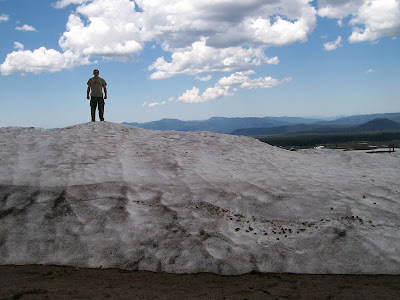 Scott on the snow, on July 9.
As we drove further into the park, we noticed that the snow on the side of the road was getting deeper and deeper. 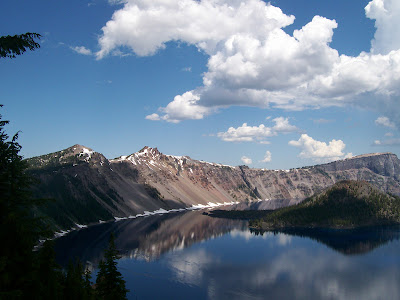 We had planned on driving the 33-mile Rim Road that goes around the caldera, and we made it almost half way around when the rest of the road was closed. I actually wasn’t very disappointed as the views we did see were so impressive, I wasn’t sure they could get any better. 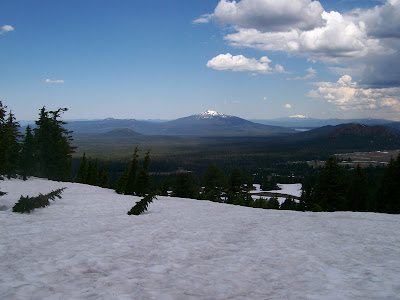 Even though we were in the snow at noon, we drove 3 hours north to our hotel in Redmond, where they tied their record high of 98.
To see more photos of Crater Lake, go here: Crater Lake on Flickr
Lodging and Dining :
We didn't stay or eat at Crater Lake, although they do have a lodge and some food options, although I think they are seasonal.
Posted by Pam Geisel - For Quilts Sake at 9:05 PM