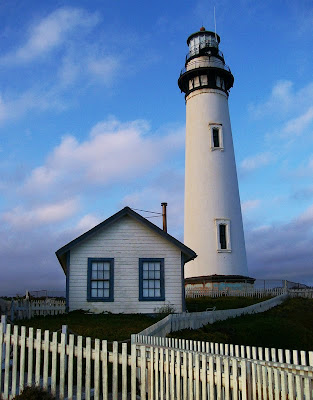 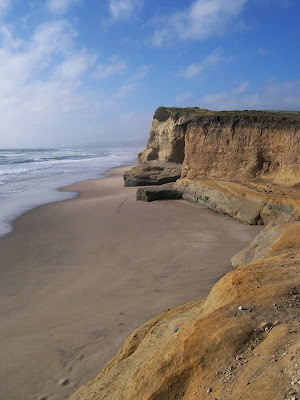 The beach at Pigeon Point Lighthouse


Pigeon Point is home to a 115-foot lighthouse, one of the tallest lighthouses in America. The lighthouse is currently closed to the public, but the grounds are open. There are also several beaches to explore in the area. 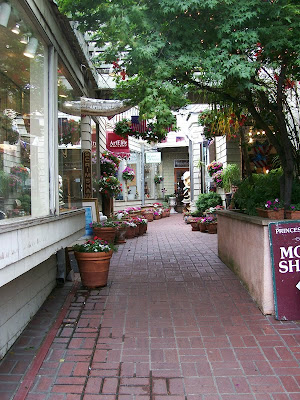 
Sausalito : Sausalito is a quaint little town on the other side of the Golden Gate bridge. It has art shops and cafes and a nice view of San Francisco, unless there’s a lot of fog. 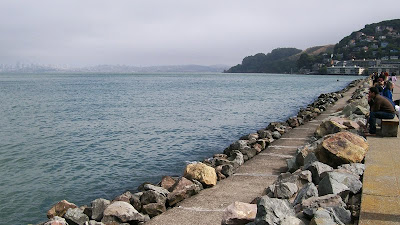 
You can easily drive there from San Francisco, or if you’re adventurous you can bike across the Golden Gate Bridge and then coast downhill. There is also a ferry that goes to Sausalito. 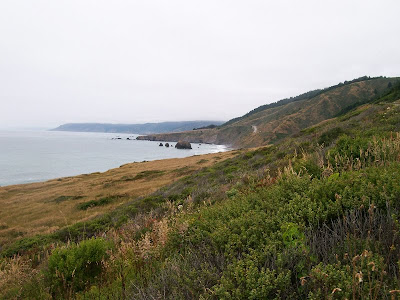 
CA-1 : Driving from San Francisco to Ferndale should only take 5 hours if you take US-101 N, but I didn’t want to drive up US-101 N, I wanted to drive along CA-1, which would take about 6.5 hours, not including time to stop and admire the amazing views or stop at the many state beaches and state parks. The GPS wanted us to drive US-101 N, but we were able to convince her it was our way or the highway. 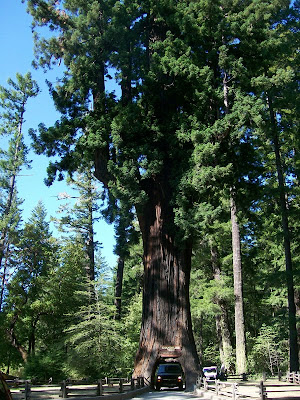 
Chandelier Drive-thru Tree : Located in Leggett, there is a redwood tree that you can actually drive through. There was a modest admission fee, which isn’t mentioned on their website. 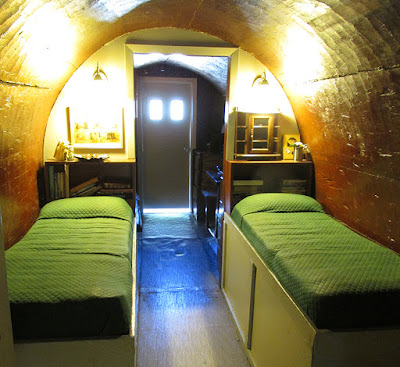 One Log House : located in Garberville, this is a house made using just one really big log. 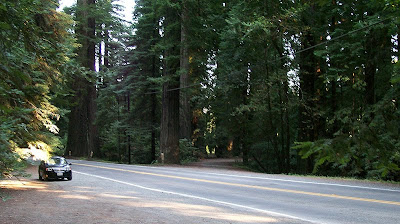 Our rental car looks like a toy next to these trees

Avenue of the Giants : A 31-mile portion of the original Hwy 101, which now parallels the new US-101 N and goes through 50,000 acres of redwood groves. The south entrance is near Phillipsville and the north entrance is near Pepperwood. This is probably one of the most scenic drives I’ve ever been on. (CA-1 would also be in this list.) Shrine Drive-Thru tree : This drive-thru tree (not pictured) is less impressive than the other one, but it does have some playhouses made from a single tree that are big enough for adults to go in and one even has a second floor. 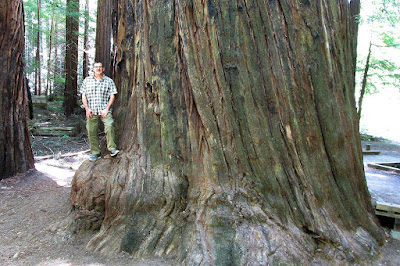 Scott on a burl on the Giant Tree

To get to the Giant Tree (and also the FlatironTree), you turn off the Avenue of the Giants on to Mattole Road, which is a paved road but when we were there in July, 2017, had a lot of pot holes. And because of the dappled sunlight filtering through the trees, the potholes were hard to see. The road is narrow so if you meet someone coming the other way, one of you will have to pull over. But it's only a few miles down this road even though it seems longer, and it's worth it to see the Giant Tree shown above. 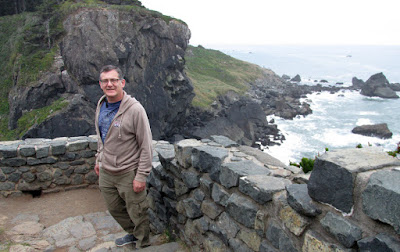 Patrick's Point State Park - has several hiking paths that lead to great views of the ocean, including Wedding Rock pictured above. They also have a reconstructed Yurok plank-house village. 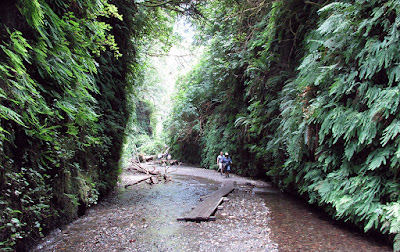 Can you see the tiny people in Fern Canyon?

Fern Canyon : this is exactly what it sounds like. A gorge with ferns growing on both sides. It's located in Prairie Creek Redwoods State Park, 3 miles north of Orick off Highway 101. Turn on Davidson Road and drive through Elk Meadow along a 6-mile dirt road to Gold Bluffs Beach. Follow the beach for 3 more miles to the parking lot. This road is narrow and it's slow going and a few times we had to drive the car through some small streams, but once we got the parking lot, the entry to the canyon was close by, and you can walk about a mile through the canyon. Parts on Jurassic Park were filmed here. 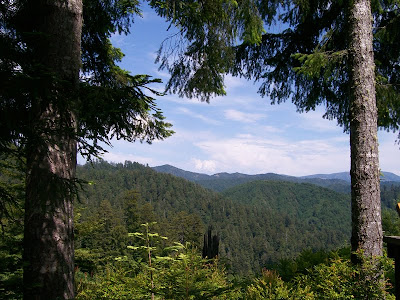 The view from the top at Trees of Mystery

Trees of Mystery : Sky Trail! Cathedral Trees! Elephant Trees! A Giant Talking Paul Bunyan! Plus Some Really Big Trees! This is one of my favorite places. There is a little bit of walking, and some slight inclines. We rode the sky trail (tram) up to the top and decided to walk down the 1-mile Wilderness Trail, which was really steep going down and then at some point actually started going uphill again. 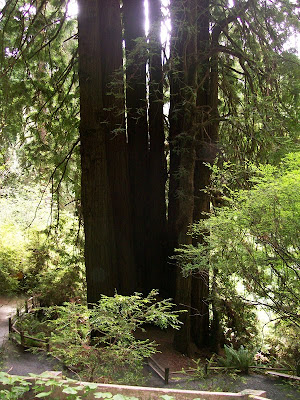 You can get married at these catherdral trees


Cathedral Trees are when several trees have grown up along the perimeter of the living remains of the stump of a fallen redwood. 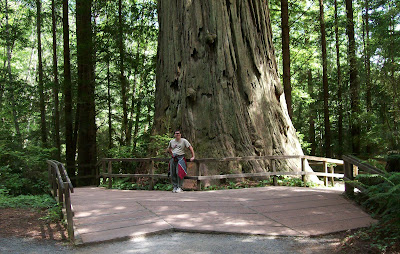 Scott and another really big tree

To read more interesting information about the redwoods, click on the “Redwood Trees!” tab on the Trees of Mystery web site. 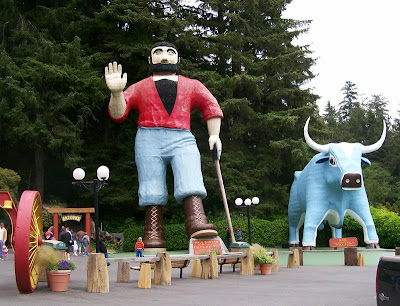 The 49' 2" tall Paul Bunyan and his 35' tall friend, Babe the Blue Ox, wave and greet visitors. Paul can actually talk and interact with the kids who sit on his foot. The day we were there, his favorite expressions were “All right!” and “Right on,” so we think Paul might be an old hippy. And considering that we’ve been quoting him almost every day since we visited, I think he was one of the unexpected highlights of our trip.

The $14 admission includes the Sky Trail and I think it's worth every penny. 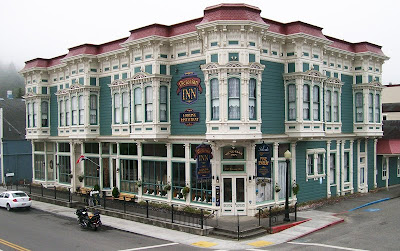 The hotel across the street from the one we stayed in
Ferndale : 21 miles north of the “Avenue of the Giants” is the Victorian Village of Ferndale. There are some hotels located in historic buildings and several gift and art shops. Of personal interest to me was the Itsy Bitsy Quilt Shop, and yes, I did buy some fabric there. 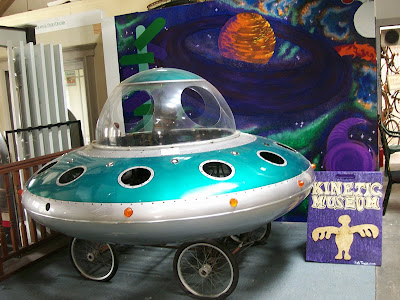 A UFO at the Kinetic Sculpture Museum

The folk art of Romano Gabriel in a shop window in the historic district of Eureka, CA

Eureka : 34 miles north of the “Avenue of the Giants” is the town of Eureka. As in "Eureka, we have cell service here!" It's a decent-sized town (about 34,000) with an interesting historic district. They have an arts night the first Saturday of the month, unfortunately we were there on the second Saturday. 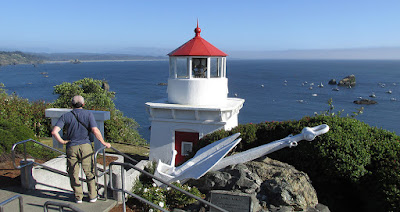 Trinidad : 58 miles north of the “Avenue of the Giants” is the small town of Trinidad (less than 400 permanent residents). We opted to stay close to Trinidad because the images on Google maps looked interesting. It has a spectacular coastline with many public beaches and offshore rocks and sits on a bluff above the ocean. It's a little fishing town and the fog often rolls in giving it a mysterious, moody feel. Plus it's very close to Patrick's Point and close to Trees of Mystery.

If you want to see more photos of the California coast, go to: California Coast photos on Flickr

Want to sleep and eat? Here's my post on lodging and dining along the California coast.