﻿
﻿We went to Atlanta so my husband could present at a conference there. While he was working, I was able to take in some of the sights. Unlike Louisville, the conference location last year, I didn’t find Atlanta very walkable.

And while there were several attractions less than a mile from our motel, the ones I was interested in were five miles from the motel, so I drove to them. I didn’t really enjoy driving in downtown Atlanta, especially around rush hour, but it wasn’t too bad because I had a GPS system. And although she seemed to misplace me a few times, I always got to where I was going.

Atlanta Botanical Garden : this was by far my favorite place in Atlanta, so much so that I have 72 photos from there (I actually took more than that but I deleted some). I won’t put all of them on this blog but if you like plants or being in nature and you’re going to be close to Atlanta, I’d recommend stopping for a visit. 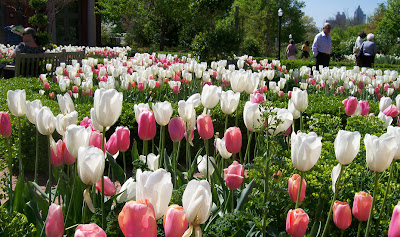 I was there in early April during their extravaganza of tens of thousands of blooming tulips (one of my favorite flowers). 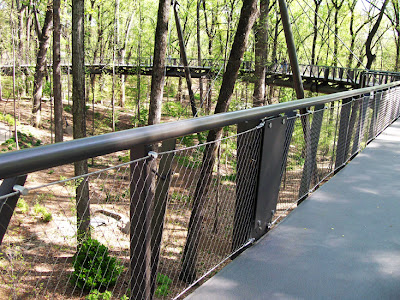 They have a 600-foot-long canopy walk which is 40 feet high and allows you to walk through a woodland area up in the trees. 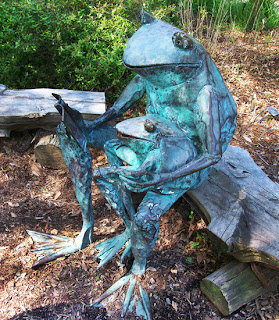 The extensive children’s area has lots of hands-on learning areas and when I was there they also had docents doing activities with the kids. Oh how I wished I the 8-year-old me could have experienced this! 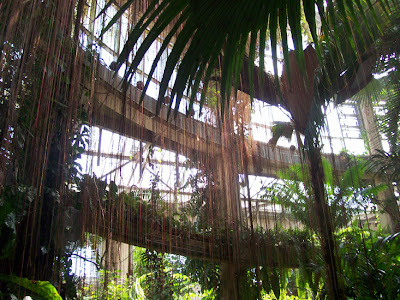 The large conservatory was then filled with wonderous plants including some Cissus plants. The "vines" that you see hanging in this photo is actually their aerial roots. 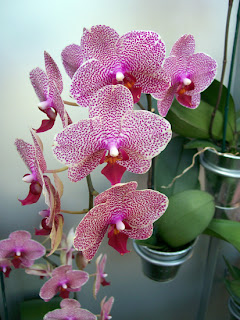 Part of the conservatory has a large area dedicated just to orchids. 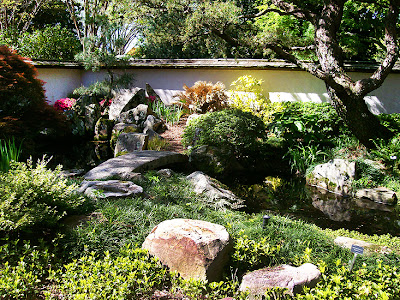 I thought that the Japanese Garden was colorful and also peaceful. 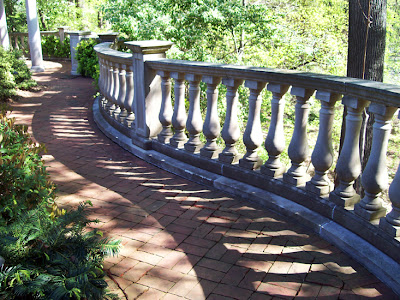 Many of the formal garden areas such as the Trustee’s Garden had walls and gazebos that made the gardens even more enjoyable.
= = = 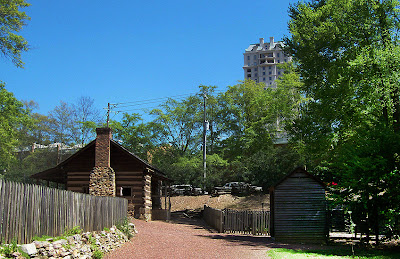 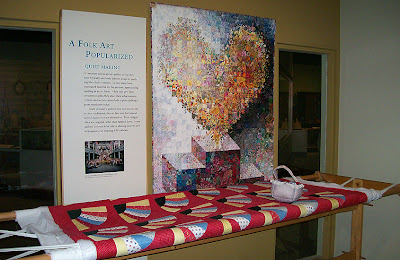 The Atlanta History Museum has exhibits about the Civil War, and Atlanta’s role in the Civil War and the Civil Rights Movement, the Centennial Olympic Games and Southern Folk Art. 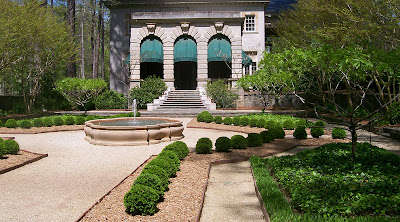 The gardens include native plants located in a former quarry on the property, an Asian-American garden, a rhododendron garden, a colonial vegetable garden at the Tullie Smith farm, and formal landscaped gardens around the Swan House (photo above). 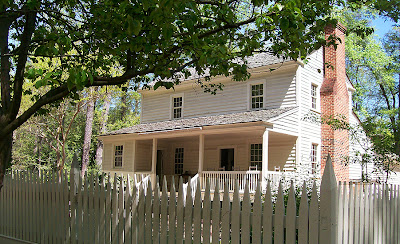 The Tullie Smith Farm includes costumed docents and a tour of the house and out buildings. 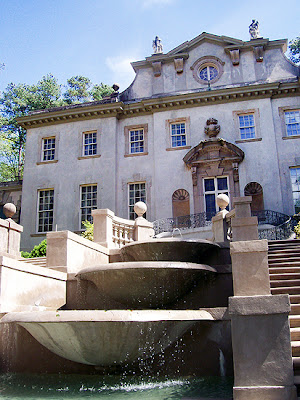 The Swan House is an elegant mansion built in 1928 for the Inman family who were the only people to live in the house which was donated, along with much of the original furniture, to the History Center. You’re not allowed to take photos inside the Swan House but I got some good shots of the outside.

Tours of both the farm and the Swan House are included in the admission price but you have to schedule your tour when you buy your tickets. The tours fill up quickly so it’s suggested you arrive early. The tours are offered every half hour but each tour also lasts for half an hour (or more) and are about a 5 minute walk from each other so you shouldn’t arrange them back-to-back. I spent several hours at the center and still felt a little rushed. 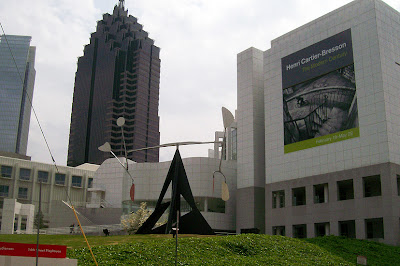 High Art Museum : The art museum spans three different buildings that are connected on two of the five levels, which was a little confusing to me. I was mostly interested in the special Toulouse-Lautrec and Friends exhibit, which was on the Skyway (top) level of the Anne Cox Chambers Wing.

After viewing that I followed the skyway into the other two buildings which, luckily for me, featured contemporary art, modern art and folk art, all of which I enjoy. As I descended in levels, I moved back through art history, which was less interesting to me. I was a little pressed for time so I didn’t spend as much time in these levels.

Their website stresses the importance of reserving tickets and that special exhibits are timed so you can only enter during the time on your ticket, although I must have gone at a slow time because I didn’t have any problem getting in and no one checked the time on my ticket.

And while they allow photography of some exhibits with special permissions, they don’t allow those photos to be used in blogs or other on-line places so I didn’t take any photos of the art inside the buildings. 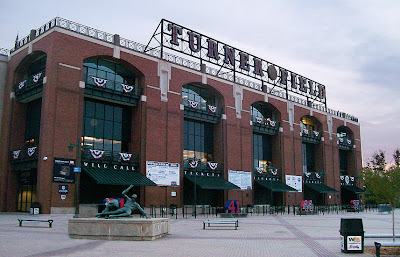 Turner Field : This year one of the conference vendors hosted a party at Turner Field, so Scott was able to go visit this attraction, which was on the top of his list of things to see. There wasn’t a game that night (and actually the party was the night before their first home game of the season) but we got to eat and drink in one of the VIP boxes overlooking the field. 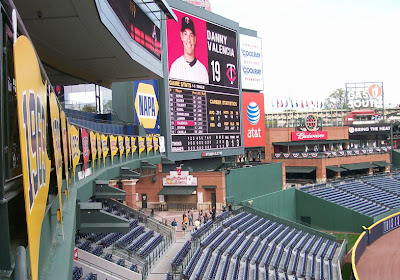 They also had the batting cages and pitching games open so Scott took several turns at bat hitting baseballs and also throwing pitches to measure your throwing speed (didn’t care about accuracy) which he seemed to really enjoy. 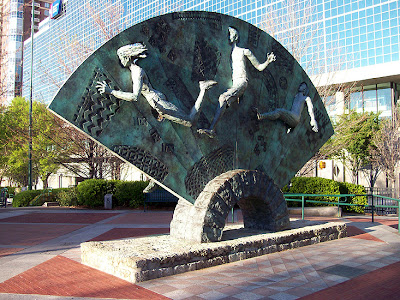 Centennial Park : You might remember a few years back that Atlanta hosted the Centennial Olympics. Part of the area has been turned into Centennial Park. The evening we were there they had a free concert in the park and there were lots of families enjoying the park. There were several fountains, sculptures and public art in the park. 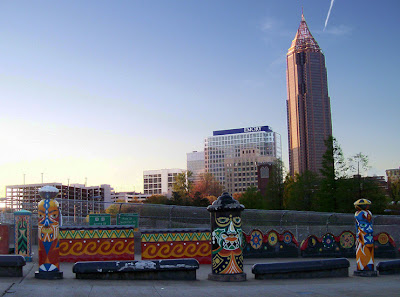 Folk Art Park : Courtland St. bridge over I-75 near Ralph McGill Blvd. (no relation). This was very close to our motel and we stumbled upon this intersection that had several pieces of public folk art. 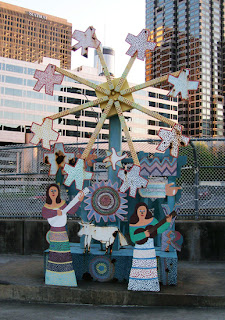 The first permanent outdoor tribute to folk art, the park was completed for the 1996 Centennial Olympic Games. 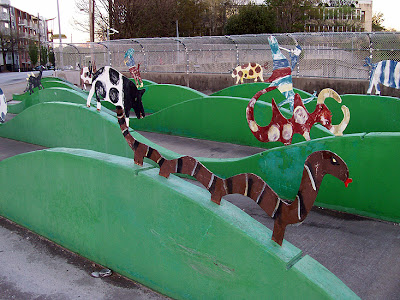 It currently seem to be in a state of disrepair and also a place where some homeless people hang out, although it seems that there are a few groups who want to make some improvements to the park, so hopefully that will happen.

Underground Atlanta : this area was inadvertently created during the 1920s when construction of concrete viaducts elevated the street system one level to permit a better flow of traffic. Merchants moved their operations to the second floor, leaving the old store fronts for storage and service.

In 1968 the five-block area was declared an historic site. Many significant architectural features survived from original storefronts. One year later, Underground Atlanta opened as a retail and entertainment center. In 1980, the it was closed due to construction of the rapid transit but was reopened in 1989 and aimed at preserving and revitalizing the center of Atlanta. 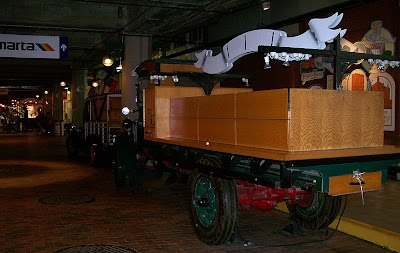 Back in the 1990s my one and only business trip was to Atlanta for computer training and I remember going to a comedy club in Underground Atlanta and I really liked the architecture.

Unfortunately it seems that Underground Atlanta is yet another victim of the economic downturn and while we were still able to enjoy the unique atmosphere, many of the shops were closed and the ones that were open seemed to sell a lot of trinkets. Hopefully it will turn around in the future. Arabia Mountain Heritage Area : located 20 miles east of Atlanta and features some large rock outcrops and is also home to several rare plants that are unique to these granite outcrop environments. In the spring, pools of red plants called Diamorpha can be seen for great distances. 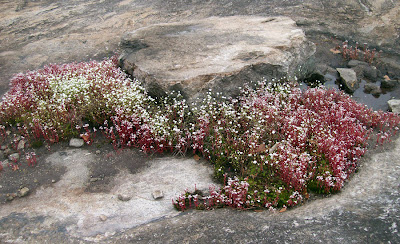 We arrived early and parked in the small south parking lot, which was full by the time we left. The rock outcrops start right beyond the parking lot. The best time to go is when it’s overcast because there isn’t much shade. 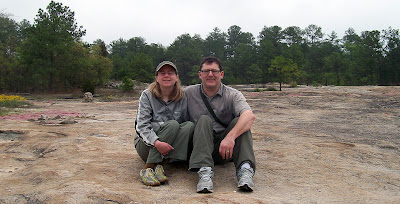 There are rock cairns (piles of stones) that mark the path. The elevation doesn’t seem that high but there was a nice view from the top of Bradley Mountain. 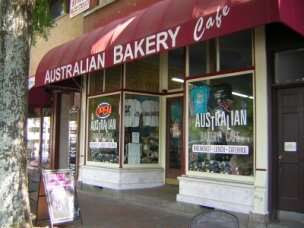 Marietta Square : Marietta is located 20 miles north of Atlanta just of I-75. Marietta Square is a quaint little downtown area with unique shops and restaurants, and on Saturday mornings from April through November they have a farmer’s market.

The highlight of this detour was eating at the Australian Bakery where they feature Aussie Meat Pies. I had the chicken vegetable pie and Scott ate a spinach and feta breakfast pie, which was similar to quiche and we shared an apple slice (a pastry) that was very yummy!

If you want to see more photos, you can do so by clicking here.

To read about some Atlanta accomodations and dining, click here.
.
Posted by Pam Geisel - For Quilts Sake at 4:54 PM