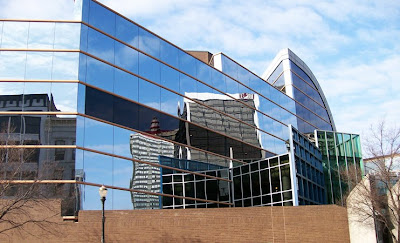 Reflections of other buildings in the glass of the Kentucky Center for Performing Arts
Louisville is only 3 hours from Yellow Springs, so we were wondering why we hadn't been before...but there's a good chance we might go back sometime!

This is the walkway which connects the two buildings that make up the Galt House. The walkway has a lounge area with a bar that is also a giant aquarium.

We stayed at the Econo Lodge Downtown which was a budget motel. The car traffic was a little noisy, but it was clean, functional and close enough to the Convention Center that Scott could walk from the motel to the conference and back while I drove the car to the attractions.

The 21c Museum Hotel's limo that doubles as public art.

If money were really no object, I might have chosen the 21c Museum Hotel because it looks artsy and unique. It’s located in the museum district on West Main St. If you’ve stayed there, let me know what it’s like. They also have a contemporary art museum and a gift shop, although I wasn’t able to find it. If you really want some fun, you can rent the 21c Pip Mobile and drive around the city in a piece of art. I did find this, parked on the street. And no, it's not a typo, the pips are the little red glass pieces attached to the car.

Louisville Dining :
We were fortunate that some of the conference vendors had parties in the evenings so we didn’t have to pay for dinners some nights. 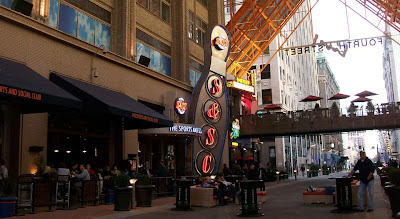 Fourth Street Live: Located a few blocks from the convention center and connected by the covered walk ways, this is the place to go for nightlife. Part of the street is covered by a large, glass pyramid and the brick street is often blocked during events and weekend nights. They have upscale dining, fast food, a comedy club and a dueling piano bar (we didn’t go to either, so if you go, let me know what you think). We did go to the Ri Ra Irish Pub and got a generous order of fish and chips, and they have Guiness and Smithwick's on draft. Fourth Street Live is located on 4th Street (obviously) between Liberty and Muhammad Ali Blvd.
Louisville Pies :
Yes, pies have their own section. We only tried one, the Derby Pie (R) which I got at the A Taste of Kentucky store. It’s a pie with chocolate and nuts and it was yummy!
Posted by Pam Geisel - For Quilts Sake at 6:35 PM